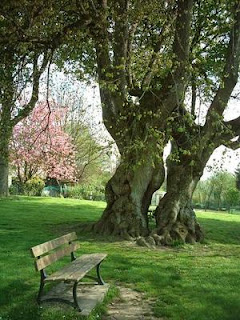 This week's tree of study is the Linden.  I chose this one because I used to use Linden scented soap which had such a soft and clean smell it gives me warm memories :)
Elemental Association: Earth
Astrological Signs: Capricorn, Taurus, Virgo
Ruling Planet: Venus, Saturn
Gender: Female
is a tree arrayed with leafy green foliage worthy of mention by such notables as Pliny and Aristophanes who both remarked upon its beauty.  Being both strong and lightweight, Linden has been used for a number of purposes over the ages from corset boning to yokes for the plough as relayed to us by Virgil: “A light linden-tree also is felled betimes for the yoke”.  The inner bark was sometimes used for paper.
The Green Dryads, or tree spirits, were said to be wedded to trees. In Roman mythology the tree was a symbol of conjugal love and fidelity.  It was described by the poet Elizabeth Barrett Browning in the following passage:
“Here a Linden-tree stood, bright'ning
All adown its silver rind;
For, as some trees draw the lightning,
So this tree, unto my mind,
Drew to earth the blessed sunshine
From the sky where it was shrined”
It is sometimes known as the "Bee Tree" because the aroma and nectar of the blossoms are very attractive to them. The pale-colored honey made by the busy visitors is of excellent quality.   sap can also be made into a nice wine.
Another common name for is the Lime Tree. It is the National tree of the and in Slavic mythology it is sacred.  In , towns would hold judiciary meetings under the with the belief that it would help to uncover the truth.  In German folklore it was called the "Tree of Lovers".  This is possibly attributed in part to the passage by famous medieval German poet Walther von der Vogelweide:
“Under the lime tree
on the open field,
where we two had our bed,
you still can see
lovely both
broken flowers and grass.”
This could also be attributed in part to an older fertility rite where the Grass King would hand over his crown under a grove of seven Lindens so that it could be stuck into the soil of the flax fields to promote growth.
will be useful with magic and spells that focus on love, romance, honesty and jurisprudence.  Ancient Scythian diviners also used to weave leaves of around their fingers when speaking prophecy, claiming that the trees would speak to them through their leaves.
This wood can assist in seduction or coercive efforts, especially when accompanied by the aromatic blossoms.  It will also favor genuine endeavors that may require some hard work or attention to detail.  Another interesting magical quality of the is that it can assist with the recalling and enhancement of memory.
Posted by Fantasy Arts & Entertainment at 10:05 AM