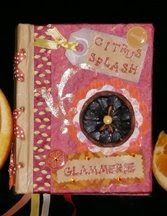 I'm feeling rather accomplished, if eager to get back to book sewing. Yesterday I finished two new creations, my Faerie Glammeries. Etymologically speaking, the word 'glammerie' is an amalgamation the words 'gramayre' and 'glamour' indicating these uniquely decorated spellbooks for Faerie or Elvish magical secrets, songs, poems, recipies and so on.


Unlike average grimoires which are often emphasized by their serious formality, Glammeries are crafted to reflect the wonder of the world around us as a conduit of inspiration. Each one has its own really bright personality and if glamour magic is about anything, then it is the alluring and shine.

I was especially pleased with the Citrus Splash Glammerie because I tried out a new technique that worked really well what with the laced ribbon down the spine. Plus I got to use one of my new crafting tools which has been pleasing me to no end :)

On top of all that, I've got at least two more Glammeries waiting to be finished and I researched the three new woods that I've got for wands: Pau Ferro, Monkeypod (or Raintree) and Sweetgum. I should have the latter two up on my sites later this evening.

Spring Fairy Festival is this weekend, starting at Noon and I still feel as though there is just TONS of work to be doing. I've been learning my way through Google AdWords and getting some adverts out there and am considering the same on FaceBook. We'll see. For now, back to the table!
Posted by Fantasy Arts & Entertainment at 11:29 AM