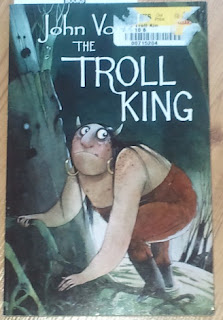 I have the grand fortune of knowing many a magical folk such as Gnerkgzorp the Goblin King, Wotan the Barbarian and the Troll King who lives in the Duchy of Lilac Fields (or Amethyst Brambles, depending on your perspective).


Once apon a time a fat man wandered into the world of fatherhood. He, being from a family of lesser parents, but good watchers of children was woefully unprepaired for this daunting task.


Nonetheless, he grabbed the task with both hands and roared to the skies, "I AM A DADDY!"


From that day of knowledge he was unsure what was going to come about, but he started preaching to his unborn childling the wisdom of baseball and the stories of lore like Who Was on First.


The Troll King spoke to his child through the womb and told stories of great feats and of gaurdians past and present. Names like SPIKE and Rascal were present! Prominent also was the great warrior THREE! All were servants of the Troll King and protectors of the Fairy Princess.


Sooner than a wink of they eye, the day came that the Troll King's daughter, a young fairy princess in her own right, was to receive her birthright and become magical herself. The Troll King travelled to the Emerald City, to the Crytal Castle of Princess Lolly.


There, he struck a bargain between the elder and younger Princesses.  Lolly would make the young princess her first magic wand. Many branches were gathered for the bargain. Branches of quaking aspens, elm, plum and pear. The most prized however, was the Lilac.


The Lilac was in great demand and grew with great abundance in the Troll King's land.  Using the raw branches provided by the Troll King, Princess Lolly crafted an elegant wand for the young daughter.


Thus the Troll King fulfilled his promise to the little fairy princess and granted her first wand, made from Lilac wood and Unicorn hair and Spruce. 13 and 3/4 inches long.

Here begins the start of many an adventurous tale...!
Posted by Fantasy Arts & Entertainment at 12:00 AM